ROAD TOWN, Tortola, VI- One week ago the islands of the Bahamas were lashed with torrential rains and winds of a category three and four hurricane, causing infrastructural damages and taking out power in many areas.

One of the biggest challenges for the Government of that country is to restore power to the populace in quick time.

In an effort to achieve this objective, the Bahamas requested assistance from the Government of the Virgin Islands for technical expertise.

And today, October 13, 2016 a four-man team from the Transmission and Distribution Department of the BVI Electricity Corporation (BVIEC), began their first day in the fields in the capital Nassau, helping to restore power to the over 1,000 poles that were taken out by Hurricane Matthew.

The team’s deployment came following a request for assistance from the Bahamian Utility Company through the Caribbean Electric Utility Services Corporation (CARILEC), of which the BVIEC is a member. The contingent comprised of Foreman of Transmission and Distribution, Mr Trevor Stevens; and Electrical Linesmen Messrs Toriano King, Damien Richardson, and Ronald Baird.

The team is expected to remain in the Bahamas for the next few weeks.

General Manager of BVIEC Mr Leroy A.E. Abrahams commented that the team will be assisting in providing that sort of relief and returning these people’s lives to normalcy.

Minister for Communications and Works, Honourable Mark H. Vanterpool (R4) stated that he is pleased that the territory can be of assistance to its Caribbean neighbors and are able to respond swiftly once again.

“I am confident that their efforts will bring relief,” he noted, adding “We should all keep them in our prayers for the remainder of the Hurricane Season.”

The Jamaican Public Service Company has also deployed a team following that island’s share of the hurricane. The Cayman Utilities Corporation, in addition, is providing the same kind of support to the Bahamas.

According to the BVIEC boss, the cost of the mission is largely being funded by Caribbean Electric Utility Services Corporation (CARILEC) hurricane fund.

When asked about the other hard hit areas in the Caribbean and whether or not the BVIEC will also be stretching a hand, Abrahams had this to say: “We have not received any request for assistance from Haiti. Jamaica has been able to restore whatever damage that they had and ultimately they were not only able to do that but also to dispatch assistance like us to the Bahamas with their restoration process.”

Matthew made landfall in Haiti and eastern Cuba on October 4, 2016 as a Category 4 hurricane, from there, it hammered the Bahamas on October 5-6 as a Category 3 and 4 hurricane. From then on, the southeastern United States was then hit hard by Hurricane Matthew as it moved very close to the coasts of Florida, Georgia, South Carolina and North Carolina.

Matthew made one official US landfall on October 8 southeast of McClellanville, South Carolina, as a Category 1 hurricane with 75 mph winds. 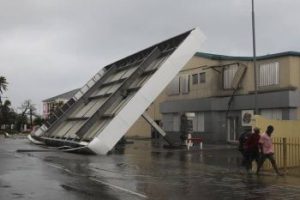 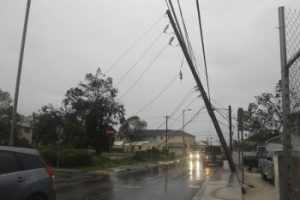